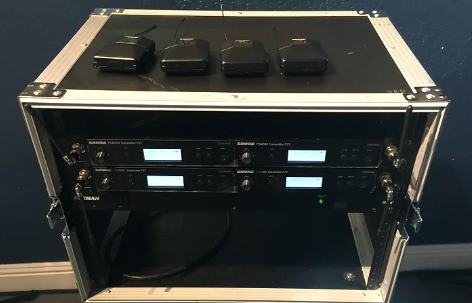 One of the most important things for a musician when they are on stage is the need to be able to hear themselves clearly, if they can’t, they are going to produce a sub-standard performance. There used to be only one way of doing this and that was through what is known as a floor wedge or floor monitor. This is simply a speaker that is placed in front of the musicians so that they can hear themselves. As you can imagine, these speakers would be quite bulky and take up a lot of space on stage, especially if there is a large amount of musicians on stage, all requiring monitors.

This issue has now been solved with the invention of in ear monitors (IEM). The clue is in the name as to how these work, just like a floor monitor but rather than having a speaker on stage, each performer has a set of IEM’s in which they can hear themselves and whatever else they require in their mix. For example, a click track if the performer is a drummer.

Less expensive – A fully functioning quality IEM system with custom ear buds can cost hundreds and even thousands of dollars (however high end wedges cost thousands as well)
No sound isolations (having IEM’s can sometimes block out the noise of the crowd etc.
Shared mixes – If time is not on a bands side, the engineer can arrange to have various band members using one wedge, not ideal in some cases, but time efficient.
Cons

More noise on stage – If you combine the front of house speakers, guitar amps and several monitors on stage, it sure is gonna get very loud, very quickly.
Less space on stage – Again, combining the amps, instruments and people with more bulky monitors doesn’t create the most comfortable stage plan.
Increased chance of feedback – Because of the amount of things blasting out at you and the audience.
Limited custom mix – for some musicians, having a custom mix is essential, such as the drummer needing a click track at times, you can’t put a click through a floor monitor or the audience will hear it, not good. If your gigging in a small room or stage, chances are you’re going to hear someone else’s stage mix, and it’s took loud!

As you can see, having a floor wedge has its advantages and disadvantages, now onto IEM’s. If you’re gigging week in week out like most of my clients, I would suggest investing in some in ear monitors. We’ll go through the pros and cons of these now:

Hearing protection – In ear monitors are designed to block out as much noise as possible to protect the hearing of the wearer, with in ears, the harsh frequencies like that produced from the crash of drum cymbals are either blocked out to a certain extent so you can still hear them but just not as loudly.
Custom mixes – With in ears, you can have a mix that is custom made for you, this take some time during soundcheck, but is well worth it especially with digital mixers nowadays where your personal mix can be saved for the next show. The quality of a mix can make or break a performance for a lot of musicians, if you can’t hear yourself or those around you, things could go horribly wrong. Thankfully with in ears, the sound levels can be adjusted without affecting anybody else in the band.
You can hear more clearly – Because your monitor is literally in your ear, you can hear everything more precisely and be really locked into the rest of your band members, this helps your performance a great deal.
Cons

Expensive? – Yes, then can be, but again the investment is worth it if you are a gigging musicians who takes his/her performance seriously, just as you would for a quality instrument. For a solid IEM system, expect to spend anywhere from $400-800 for a system with good quality ear buds.
What if they breaks? – This doesn’t happen too often if you look after them. Make sure to always inspect them, clean them properly and you should have many many years of worry free performance.
Could cause hearing damage – If your sound guy isn’t responsible or experienced, first of all they shouldn’t be labeled a “sound guy” but if you do fall into a position where that is the only guy working the console that day then it could be a bad show for you. He could send a massively hot feed to your ears, this could potentially damage your hearing if it keeps happening, before you switch to in ears, you have to be sure that the engineers your working with know how to handle their desks properly, if all else fails ask for a stage wedge for backup.
Batteries – Typically not a make or break topic, but it’s something else to consider when adding a wireless system to your arsenal. Yes, the receiver (belt pack) takes batteries. Invest in some quality rechargeable batteries and a charger and you’ll always have fresh batteries for your show. Most rechargeable batteries can get you at least 4-6 hours of air time on a full charge.

Personally, once I switched to in ears, using a wedge was never the same, I just couldn’t do it, and I’d imagine its the same for many people that have made the switch. There is a learning curve and may take some time to get used to using a IEM system, so be prepared for that.
A fellow session musician friend of mine described using in ears as “hearing in HD” and I have to say, his right.

I’m a firm believer in IEM’s. We offer up to 6 IEM system as part of our sound packages. All you would need to provide are your ear buds and a great attitude!

Until next time, keep the groove on.
-Sandro Costa